Karan Joshi has the unique position of being RNT’s first ever member. He joined us the day we launched in May 24th 2017 and is still with us!

When Karan approached us back in 2017, he had been training for a while. He was relatively fit. But he wanted to get really ripped for a holiday to Ibiza. He wanted to get beach body ready, he was excited to get started.

Those 8 weeks not only got him that ultimate physique he so craved, but also a renewed love for training.

“I was always active growing up. I was a tennis player and I played at quite a high level. This meant that I was training quite hard, I was running a lot as I needed to be slim, but I had no focus on aesthetics and there was very little strength training. However, I stopped playing serious tennis after I got really badly injured. I tore my abdominal muscles really badly trying to strengthen my serve by using a 5-6kg dumbbell! I had to stop to recover and then my focus changed to education and university. While I continued to go to the gym every once in a while it was never truly consistent and I didn’t have a structure.”

Karan had his big holiday in Ibiza coming up. He had been to Ibiza before and had seen the people there and had eyed their physiques with jealousy. While he was fit he felt he wasn’t really anywhere near that level so wanted to train with us to get ripped and ready to party!

“I sent out the photos of my front, back and sides to the RNT team at the start and, when I looked at the pictures, the true state of my body hit me. It was a reality check for me, the pictures don’t lie, I knew I had to take my fitness to the next level”

Learning about Diet and Nutrition

After his 8 week training plan to get his coveted 6 pack abs, Karan continued for more. He had loved how setting the 3Ss (system, strategy and structure) had changed his lifestyle. His biggest take away was the knowledge he’d gained around nutrition.

“I had always enjoyed training, but the structure made me love it more. The biggest thing though was learning about macros. I learnt what foods worked for me - what kinds of protein, carbs and fats suited my palate. I am lucky in the sense that I don’t mind eating bland food, as long as the food fuels me I don’t mind. But nailing the amounts made such a difference. I have, over these past 4 years at RNT, got into the system where I eat pretty much the same thing every day - for breakfast one slice of toast; lunch and dinner is chicken, rice and veg. I just change the amounts based on whether I happened to be cutting or bulking. This really has helped me stay in great shape and keep my engines running while I train.”

Since Karan had been a champion tennis player, training was not alien to him. He enjoyed the challenge and the ‘self-competition’ - to improve on his lifts every week.

“I love the practice of making videos of the lifts and sending them to the team. When taking a video you really don’t want to fail. Plus I have learnt to be really think-skinned about the feedback. The progress I have made with my lifts hasn’t been because I was just handed praise for my videos, I was always given pointers to improve and if my efforts weren’t solid enough, I would be pulled up on it and pushed to go harder. There is no hiding!”

This attitude towards being open and willing to work on the feedback given is so crucial to making progress. This is the growth mindset that is needed to make changes - if you can take feedback and work to improve your performance in the gym, it carries over into other areas of your life allowing you to grow and improve across the board. 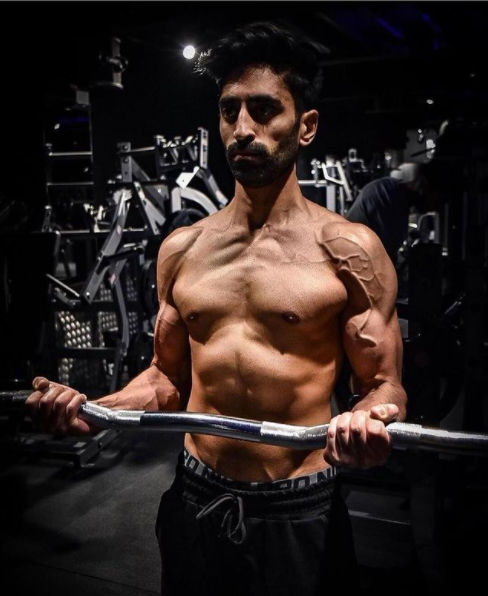 Changes don’t happen overnight. It’s not about biting the bullet for 6-8 weeks, getting that aesthetic body and then letting it all go. It is the consistency to both training as well as diet that will bring results. Karan truly internalised this over the years and has made consistency and commitment to the process one of his super-rules.

“It all starts with taking care of yourself. You have to be at your best and only then will you be able to deal with whatever life throws at you. I have made this commitment to training because going to the gym helps me clear my mind. When I’m having a hard time, training helps me calm down and I instantly feel better about it. It is my release. 2020 was such a hard year with the pandemic and everything, I think if it wasn’t for training I would have lost my mind!”

Karan has realised over the years with RNT that your training journey truly lies with you. If you don’t take ownership by weighing out those meals, turning up at the gym and making a sincere effort, nothing will change. This is when it stops being only about the aesthetic element of training.

“Of course we all want to look good, that’s part of it. But the biggest thing is about being healthy. I am as fit now in my late 20s as I was when I was 16-17! And this has happened because no matter how wonderful and precise your training and diet plan is, nothing will change if you don’t own it, internaise it and make it yours.”

Karan lives by his 3Ss (structure, system and strategy) that were put into place. He trains consistently and makes sure his diet stays within his macros. He has learnt to flex and bend so he can have fun and enjoy his social life without worrying about losing his progress.

“I love my beers! I know it’s calorie heavy though, so when I know I’m going to be out I will almost intuitively now make adjustments to my food. Sometimes I even take a weekly average to make sure that I am within my limits. My friends are also used to me now and know that what I choose to order will be different and they’re cool with that. What I especially love is the knock-on effect my choices have made on those surrounding me. My brother and my friends all want to make better choices, live healthier lives and that is such a wonderful thing.” 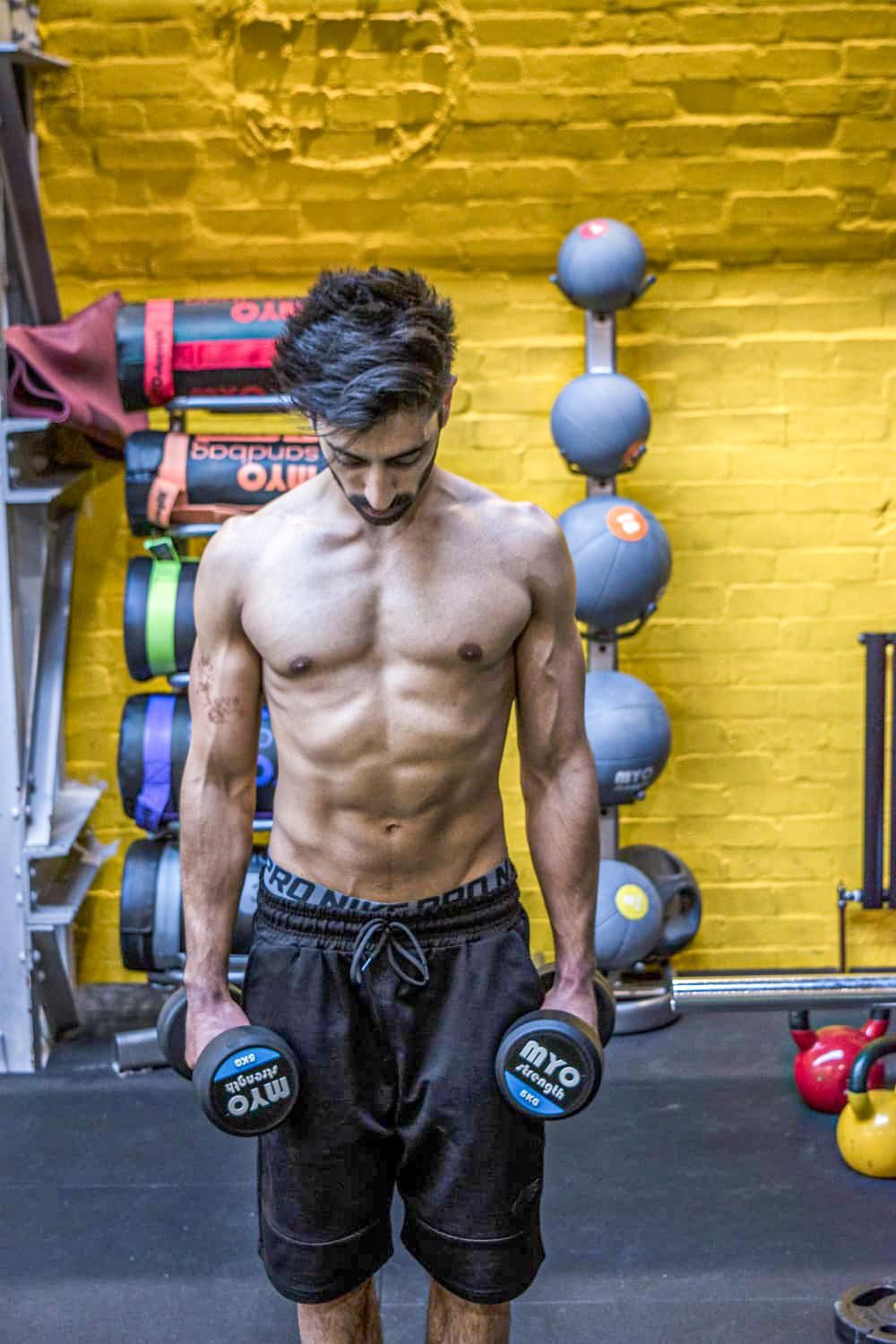 In 4 years Karan hasn’t wavered. He has made mistakes but he has always jumped up from those mistakes eager to learn and improve.

“Making mistakes is part of the journey, only then can you really grow. What keeps me going is how it makes me feel. When doing something makes you feel so good, you don’t want to stop. It keeps me going. I have had long maintenance phases as well as bullying phases and they have both been really educational.

I remember while bulking and ‘embracing the fluff’ I went a bit overboard, I thought the extra calories meant I could eat pizza and drink alcohol, and then it hit me, I had got a bit too fluffy! And then I had to cut back again! Now I know that even during a bulking phase you have to be careful and the key truly is moderation!

During my maintenance phases I just stuck to my 3Ss, stayed consistent. As long as I was doing that I was fine!”

It takes so much time and effort to build strength and a routine and it can be lost in a couple of weeks, this is why Karan’s story is one of such triumph! He found his rhythm and that has become his lifeline. The fact that he chooses to train first thing in the morning means that life can’t derail him from his purpose. The fact that he sticks to a meal plan day in and day out might be boring but it is effective, he doesn’t have to worry about being too busy or too tired to make the right decision. These structures keep him on the journey, allowing him to gain momentum and evolve as his journey progresses.