A woman’s total transformation by conquering her struggles with food

Poonam’s quest to find the best version of herself started 15 years ago. As a child she was always sporty and her parents were good role models. They exercised regularly and tried to stay in shape.

“When I was little I always remember my mother would pop in a VHS tape (remember those!) in the VCR and do some aerobics with exercise instructors like Rosemary Conley and Mr. Motivator. For me and my siblings we used to run around and join in for bits of it because we thought it was fun. My dad, even back then, believed in buying only wholemeal and brown rice, which was quite unusual.”

Although her parents had the right intentions and tried their best it didn’t translate across the board in terms of calories or how to watch portion sizes. This meant that although she was relatively healthy she still carried some extra body weight.

Body Image and Nutrition - The Link

“I was always skinny, but I guess I still carried some ‘puppy fat’. I had skinny arms and legs but I had some weight around my middle. I took to wearing really baggy clothes to hide my belly, sometimes people would even ask me if I was pregnant! One day I remember my mother querying me about it and she decided to take me to the GP to have it looked at. It turned out that I had a huge ovarian cyst the size of a baby! It had to be operated on and I now have a 14 inch scar across my waist! After my operation I felt so much lighter, and I could finally wear the tight tops and jeans all my friends were wearing.”

The ovarian cyst was a medical condition that made her feel heavy and bloated. After the operation - she found a new bounce in her step, felt healthy and found a new surge of confidence. Unfortunately but also predictably, without proper knowledge on nutrition, Poonam started eating more than she needed. She started to gain weight that she couldn’t shift. It all started to roll out of her control when she decided to travel the world. While volunteering in multiple countries was an amazing, life altering experience she had no control over her food.

“I travelled the world which was great! I had some wonderful experiences, but I ended up ballooning! I put on a lot of weight. I was eating a lot and not exercising and when I came back to The UK, I weighed 80kgs!”

Poonam knew she needed to make a change so she joined the gym, signed up with some personal trainers. She had some results but nothing that really lasted. After enrolling in a course on nutrition, as it had always been a subject she was interested in, she saw some results but something still wasn’t working.

“I came across RNT in 2017 when it launched, but I was intimidated as I thought it was meant only for bodybuilders, I didn’t want that, I wanted to be fit and strong but not to that extent. I realise now that I was so mistaken. But I don’t think of it as lost time, everything happens at a time when it is meant to happen and my journey with RNT started at a time when I was really ready to commit.”

Emerging from the Shell

Poonam felt like she was trapped in a constant cycle of guilt over her eating as well as envy at other people’s looks. A part of her stayed positive: she believed in herself and knew that as long as she put her mind to it, she would succeed. Another part of her chided her progress, which she believed was ‘slow’ and therefore not good enough.

She realised that comparisons can really take the joy out of her own accomplishments and although she was making steady progress it took longer than some of the other members in the RNT journey.

“I had to quieten the proverbial ‘devil’s voice’ in my head and pay more attention to the ‘angel voice’ that was positive and encouraging. It took me a while but I slowly managed to emerge from my shell, accept where I was and focus on my own transformation and not compare my journey to what others are experiencing.”

Poonam’s major take away through her RNT journey was that everyone’s path is different. This mindshift occurred 3 months into the process.

“I found myself getting annoyed when I saw other people hit milestones and targets. And I asked myself, ‘Why are you getting annoyed? They were after all doing what they were supposed to do.’ There is no time limit on reaching these targets. And that’s when I decided to stop stressing about other people’s accomplishments and really started to concentrate on my own. I decided to take on the role of the tortoise like in the fable, The Hare and the Tortoise, I would be slow and steady and win the race!”

Be The CEO of Your Own Life

While listening to one of Akash’s podcasts, she heard him speak about taking ownership and ‘Being the CEO of Your Own Life’. In the podcast, Akash compares the fitness journey to building a career. The key to excelling in any career is to commit whole-heartedly to that profession for a significant portion of time. It is no different while striving for physical fitness, just like a career won’t take off in just 30 days, health and fitness can’t be established in 30 days either. Striving towards excellence in all aspects of life is a life-long endeavour and she was ready to commit.

“It was during The Grind that I realised that this is a process I have to commit to! I was able to pick up the pieces of the jigsaw puzzle - PT sessions, 30 day plans, nutrition and they all came together in The Grind. During that period I pushed myself further than I have ever pushed myself before in my life! I am now 30kgs lighter and feel wonderful”

Poonam’s transformation journey unfolded at a pace that was sustainable and comfortable. Her story is a classic example why standard cookie-cutter plans wouldn’t have worked and didn’t work before she joined RNT. Her carefully constructed plan helped her keep her goals in sight while she made steady progress. Her journey gave her a clarity of purpose and mind. She developed an empowering growth mindset that allowed her to be open minded so she could progress. Poonam used the physical as the vehicle to ride above the tide to create a positive outlook to her transformation that went way beyond just the physical. Her journey made her think about the connection between the mind, body and soul and how important it is to be accountable to yourself to truly enjoy growth.

Shift of Perspective from Goal to Growth

“I don’t regret my past decisions, only through trial and error did I realise what works and what doesn’t. I guess I can say I now have a pretty good BS radar! I also know that it isn’t just about meeting goals, transformation is a continuous onward journey towards growth, it is a process I will engage in for the rest of my life.”

If you would like to learn more about Poonam’s story and her ‘roller-coaster transformation journey’ as she likes to call it, tune into the RNT podcast (Episode 180). 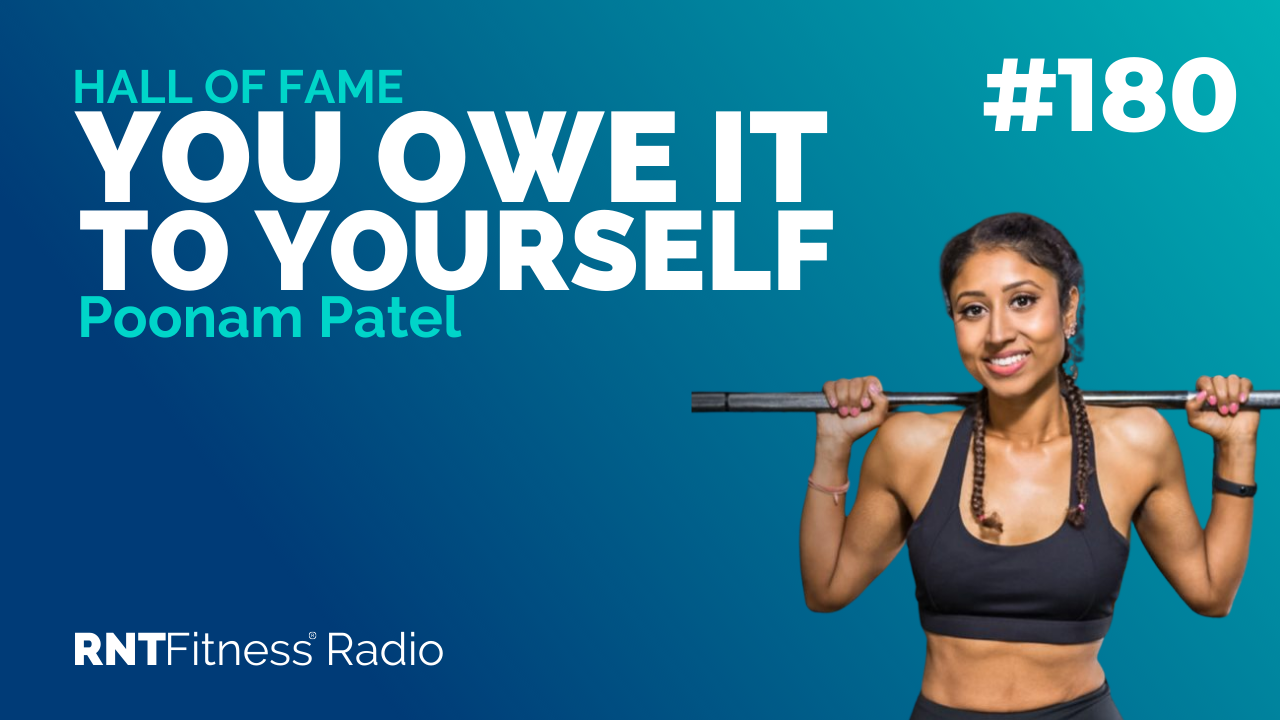 My Mistakes Series, Part 3: The 5 Biggest Nutrition Mistakes You Must Avoid

How Many Days A Week Should You Train? Part 1: Strength Training

The Secret To Success