How Rashid Got Shredded In 9 Weeks For His 35th Birthday

At the start of January, Rashid got an email from Pure Gym which told him that he’d been to the gym over 150 times throughout the previous year.

That’s a solid statistic, and anyone who’s getting to the gym three days a week is doing better than the average person.

However, the problem was that despite his consistent efforts, he looked no different compared to the previous year. He’d been spinning his wheels with nothing to show for it, and wanted to finally make a real change.

With his 35th birthday coming up in 8 weeks, it was the perfect time to take it to the next level.

As we know, starting a muscle building phase when you’re lean is the best way to approach it, so his goals complemented each other perfectly.

“I thought I knew a lot about training and diet. I’d read plenty of articles and hit the gym regularly. When I got that email about hitting the gym over 150 times and then when I looked at myself in the mirror I realised that I had just been wasting my time. Having been a fat kid and teen who slimmed out I was bouncing between wanting to put on muscle and being lean which meant I ended up with neither. I’d skip breakfast and tell myself I was doing intermittent fasting, and then have 3 chocolate croissants at work to refuel after the gym while jumping from training program to program. I realised that I needed an objective source to tell me what I needed to do.

I had noticed Akash’s articles on T-Nation and they had resonated with me. Following them up I came across RNT and saw the transformations. Naturally, you take these things with a pinch of salt but it doesn’t stop you hoping it could be you. I nearly pulled the trigger a few times over a couple of weeks but finally, coming back after a 2 week holiday, I signed up for the initial 3 months that would take me past my birthday. Seeing how bad I looked in my initial photos, with no flattering lighting really spurred me on to make this work.”

Over the next 9 weeks to his checkpoint, Rashid applied all his energy in dropping his weight and focused on his training, he met his steps and weighed his meals - as for the results they speak for himself.

Here’s the progress he made in this initial phase: 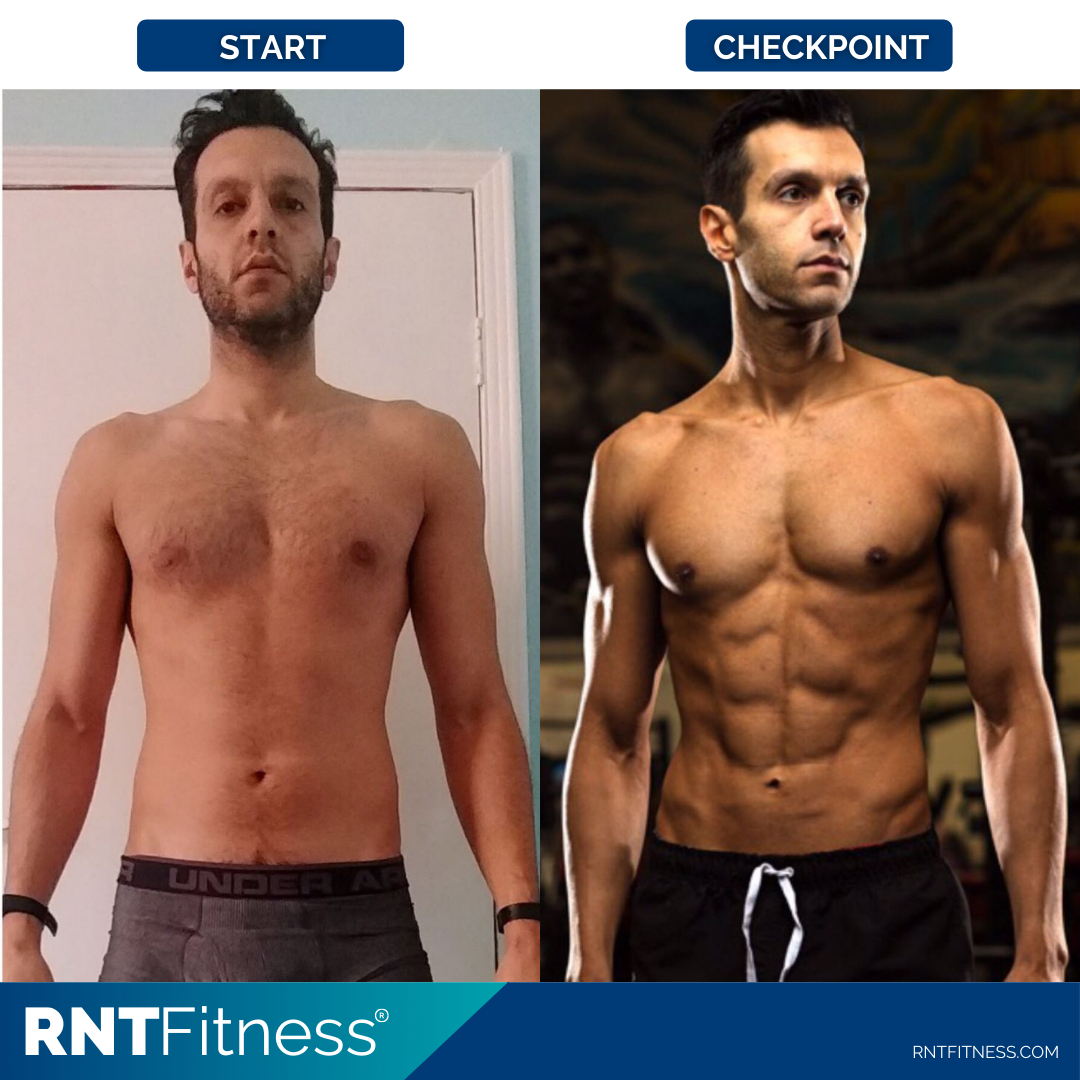 Here’s what Rashid has to say about his overall experience with RNT Fitness,

“When I came to RNT I had been spinning my wheels and had complete ‘paralysis by analysis’. I’d read too many articles, jumped repeatedly from one program to the next and no one would have guessed that I was regularly hitting the gym. With my 35th birthday coming up in 8 weeks I decided to make a change and set the goal of getting abs. The results I got were far beyond my expectations!

RNT made things very simple and I just had to execute the plan he provided. The weekly progress was really encouraging and being in continuous touch with the RNT team helped me stay on track.

I’ve been so impressed by the whole experience that I’m continuing with RNT. Next up – build some muscle! They have my trust and I’d highly recommend them.”