When RNT was set up, we aimed to solve three key problems we saw rampant in the online fitness space:

Sakhi had experienced all of these in the past, but was looking for something that would allow her to break through her plateaus and take it to the next level.

While she was well educated, she didn’t have the time or energy to sift through all the information and try to piece it together. A busy job in the City meant she wanted to remove the thinking and focus purely on execution.

During the consultation process, she outlined her goals as the following:

“My fitness goals are to get stronger but to stay lean. Aesthetically I would like to go from skinny to more of a fitness model physique. I’ve never been sporty when I was younger and I have a petite frame. I currently do crossfit twice a week and gym twice a week as well but feel the training I’m currently doing isn’t pushing me to my max (plateaued in certain lifts). I also miss training with my husband Jas in the last few months as he is on a different training program! This may also give me the confidence to prepare for a couple’s fitness photoshoot which Jas and I have been talking about doing for years.”

Right off the bat, Sakhi knew her goal, wanted to create a deadline (photoshoot), and instilled accountability into the process not only to myself, but also her husband and Ben Mark (the photographer).

This was a recipe for success, and it’s no surprise she did so well and achieved the fitness model physique she was after.

What’s really cool about this transformation is that both Sakhi and Jas proved just how powerful the ‘5 Pillars of Success’ can be. Of all the times to book in a photoshoot, they picked the first week of the New Year, which worked out to be 11 weeks away.

This meant no Christmas indulgences, New Year’s drinks, or holiday slip-ups – only a laser-like focus towards the goal!

Prior to starting at RNT, here’s what she was following:

This was a great place to start a diet – a good amount of food and no cardio!

To start Sakhi off, here’s what we did:

Training – We kept the same training set up to begin with, using two full body workouts in the week along with her Crossfit sessions. The two strength training sessions were all geared towards increasing strength in the squat, deadlift and military press.

While Crossfit isn’t something we always recommend, Sakhi enjoyed it, so we kept it in. She was also well educated on training, and had sourced an excellent Crossfit box to work out of – where safe movement and correct technique was prioritised and taught.

This was an example weekly schedule:

Diet – Her starting macros were as follows:

Sakhi wanted a meal plan to use as a ‘guide’, but flexibility to adjust macros on the fly, especially on the weekends. Because she was well versed in tracking macros and calories, this worked fine.

Here’s how an example day looked:

Supplements – Here’s what we used to begin with:

Cardio – No traditional cardio to begin with. All we aimed for was a daily step target of 10,000 a day. At the end of the two strength training sessions, we included some short interval sessions.

Strong start from Sakhi with no issues on any front.

No changes to training, diet, cardio or supplementation

A couple of wedding functions on the weekend skewed Sakhi’s weigh-in on the Monday.

She was only weighing herself once a week at this point, so we recommended weighing daily to spot any fluctuations and trends. Provided you look at the number on the scale as only data, this is an effective method of tracking. You can read more about why the scale isn’t the be all and end all, as well as how to best use it to track progress here.

Also, because Sakhi’s bodyweight was already quite low, her ‘margin of error’ for extra calories or dietary slip ups was much lower. One bad meal or a few days of untracked calories has the potential to wipe out a week’s calorie deficit! This week we made two slight changes. The first was to increase daily activity to 13,000 steps a day. The second was to introduce some carb cycling by reducing carbs to 120g on her three rest days from training. 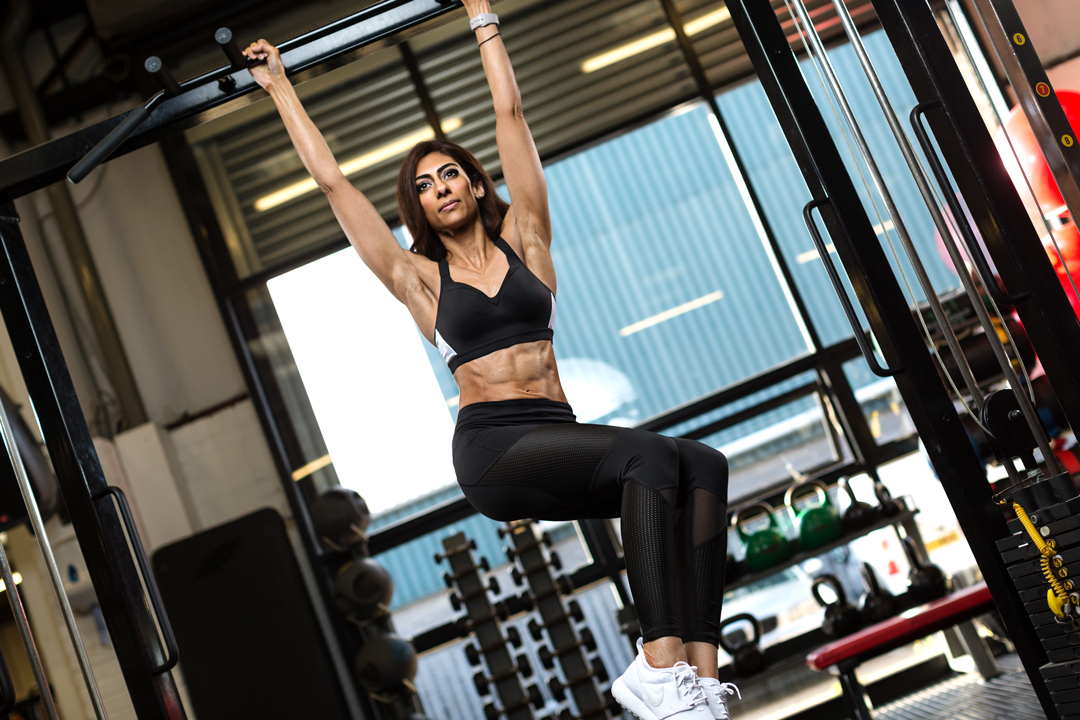 Despite picking up a cold, Sakhi got all her sessions in and nailed the dietary changes made last week. She was well on track, so no changes were made this week.

No changes to training, diet, cardio or supplementation

Bodyweight was sticking, and while ordinarily there would be no need to change straight away, there was only 7 weeks to go till the shoot.

This week we pushed on the diet front a little more by dropping carbs by 20g everyday, and lowering fats by 5g.

Changes to be implemented: Lowered fats by 5g and carbs by 20g everyday. Increased steps to 15,000 and added 25 min LISS sessions on three rest days. 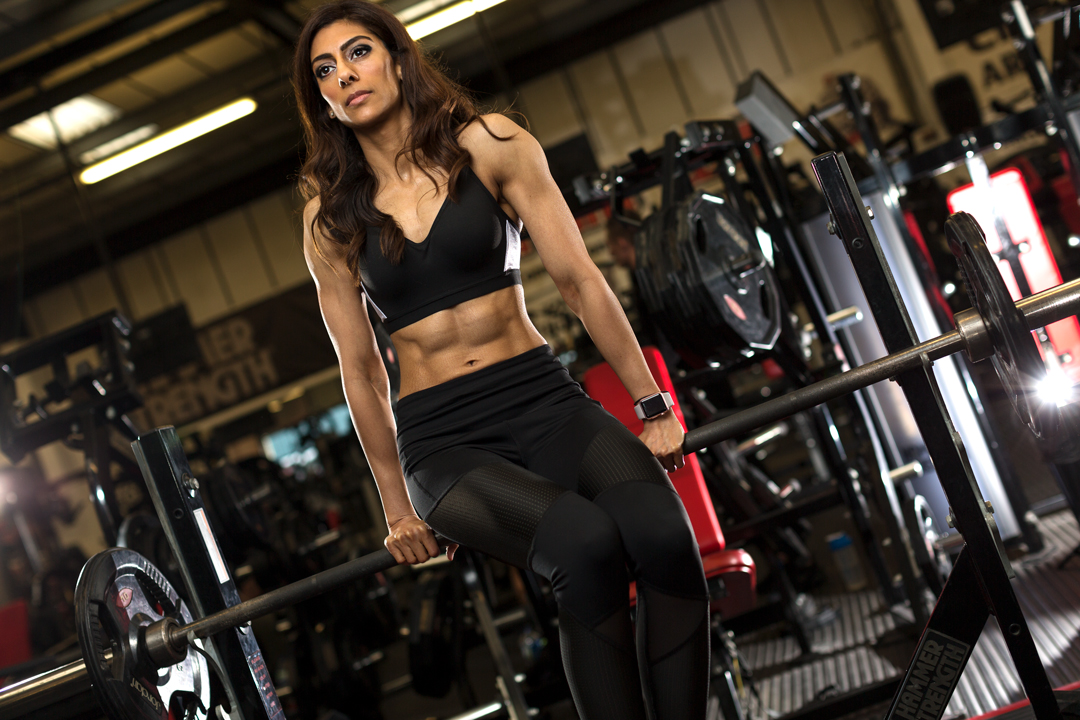 Work was extremely busy at this point with frequent 16 hour days and very little sleep making everything tough to fit in and follow. But as is always the case with the members who get the best results, no excuses were made!

To get her shoot ready we decided to increase her strength training days at this point, and so we added in a third day.

No changes to diet, cardio or supplementation.

Weight was fluctuating a lot throughout the week, but the overall trend was heading down.

Because of this, some of Sakhi’s lifts like the squat and press were becoming increasingly difficult. While it can be tough mentally to see strength plateau, it’s important to shift your mindset to focusing on the relative strength improvements made (like being able to lift the same weight when you are at a lighter bodyweight).

The only change this week was to increase the LISS sessions up to 30 minutes.

Changes to be implemented: Increased LISS by 5 minutes

No changes to training, diet or supplementation.

This was a cool week as this was when there was an RNT Christmas meet up, it’s a fun event where we invite members to train, have some food and go through some QandAs. 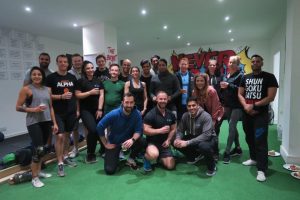 No changes to training, diet or cardio.

Despite the increased work socials and Christmas parties, Sakhi was shooting straight as an arrow. With a few weeks left, we decided to step LISS up to be done daily for 30 minutes. This way we could take advantage of the yohimbine and caffeine combination too.

Changes to be implemented: LISS up to 30 min daily.

No changes to training, diet or supplementation.

Both Jas and Sakhi kept close tabs on their progress and sent regular updates about their progress; there were two weeks left before the shoot. It was also Christmas week, so the two of them worked together to keep each other accountable. The RNT member community played a big part in encouraging them and helping them stay focused.

While a few Christmas snacks crept in here and there, no real damage was done.

No changes to training, diet, cardio or supplementation.

Into the final stretch now. Sakhi was almost there, with only maybe 1-1.5 pounds of body fat left to come off.

We decided to pull the pin at this point by dropping fats down to 40g while lowering carbs to 100g on training days, and 50g on rest days. For 7 days only, we also suggested aiming for 20,000 steps a day.

This was a hard drop, but it was only to be done for 7 days before resting up in the final few days before the shoot.

For the final week, we didn’t run anything fancy at all. All we did was taper the steps down from 20,000 right down to 6-8,000 over the course of the week, and introduce a little more carbs.

To peak for a Friday shoot, we did the following:

Sakhi’s weight dropped a little more before the end, going down to as low at 43.7kg, before coming up and settling at 44kg after.

These were here final comparison pictures: 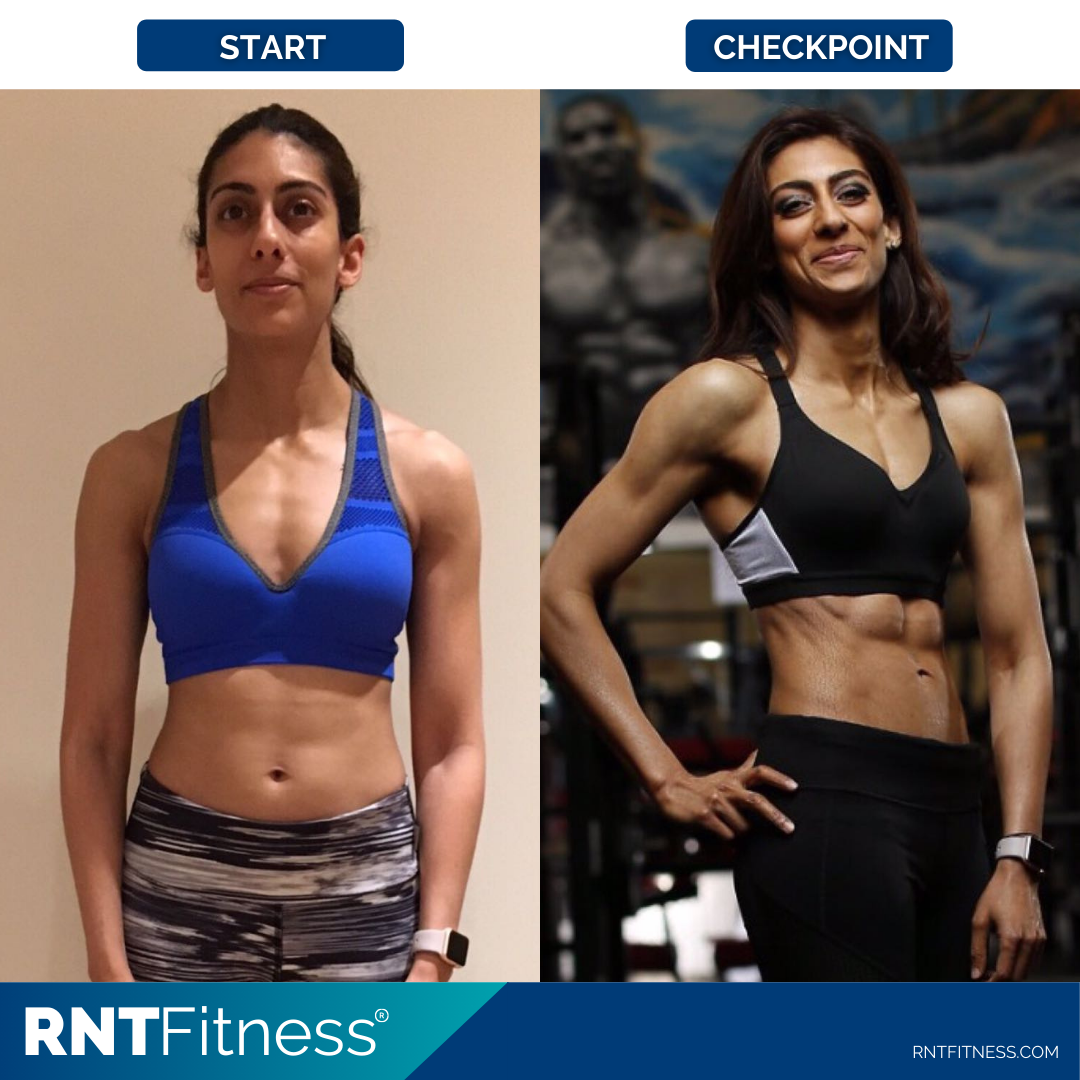 Get stronger, set PRs in the squat and deadlift, and build some more lower body muscle!

What’s been great is that 2 months after her Transformation Checkpoint Sakhi has still maintained her weight, she is only 2 pounds up from her shoot weight.

She transitioned from the diet very well, and managed to maintain all her results, which is exactly the way it should be done!

To read how best to transition from dieting, check out this article here.

Here’s what Sakhi has to say about his overall experience with RNT Fitness, and training with Akash:

‘I started focusing more on my health and fitness several years ago. I was making steady progress, but in the recent months I felt I had plateaued. I wasn’t getting any stronger, nor was my physique improving.

RNT was highly recommended by my husband who had been working with them, but I was quite sceptical having seen my fair share of generic gym PTs whose clients look the same month after month. However, seeing some of the actual results of RNT’s members made me think there was something more to them.

I wasn’t wrong. The RNT team has been fantastic from the get-go. After taking the time to understand my goals we decided on working towards a photoshoot. This felt like a real challenge, with a deadline and accountability.

With regular tracking and assessments the RNT team kept a close eye and tweaked training and nutrition where needed. They even reviewed videos of my exercises, giving me more confidence.

As the photoshoot approached, my progress was reviewed even more frequently. All my questions were answered and they provided reassurance when I was struggling both physically and mentally.

RNT went the extra mile and the Founder, Akash, came along to the shoot to give advice and support. I didn’t feel nervous and really enjoyed the day. It was so much fun.

Reflecting back, I cannot see how it would have been possible to achieve the results I did without the team’s combined knowledge, support and encouragement.

My focus is now on my performance goals and I’ve made sure RNT is there every step of the way so I can reach them!’